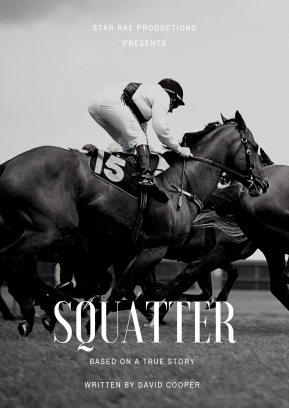 Brief Synopsis: A unruly horse is taken in by a farm boy with a view of turning him into a champion.

In 1935, a horse called Squatter against all odds won a race.  This is the story of the naive young man that trained him, and a woman called Rita who loved them both!

Harry Merton owns the biggest racing stables in Queensland.  He has won every major race over the past 25 years, but never the Great Western Steeplechase.  Now finally, he latest horse, Shoot-a-long, means he may have one last chance.  Only Squatter and his owner, Joe O’Meara, stand in his way.

Crew: To be Announced

Cast: To Be Announced

This story is first and foremost a love story between Rita Merton and Joe O’Meara, and his unmanageable horse, Squatter.  This story has been constructed from events taken from Rita & Joe’s diaries during 1931-1935, and is originally a New Zealand story.  However, for the purpose of filming the writer, David Cooper, felt it would look better set in the 1950s, with filming to take place around South East Queensland, as David now resides on the Sunshine Coast.  David is the nephew of Rita & Joe.

We aim to create a family friendly story, providing work for local Brisbane talent and crew, with the aim to submit the films to festivals around the world, and eventually a cinematic release.

Please help us bring this story to life! We are currently seeking investors and/or donations to help cover costs. Please donate here on our GoGetFundraiser Page (coming soon).

Corporate donations and large investors, will be provided with a Special Thank You, logo and/or Executive Producer credit.

Whilst subject to change, it is estimated this film will cost around $4.5M including insurance, cast payments, crew payments, equipment hire, costume requirements, catering and locations/venue hire. This production will be filmed over approx. 55 days in various locations including Caloundra and Beaudesert, QLD.